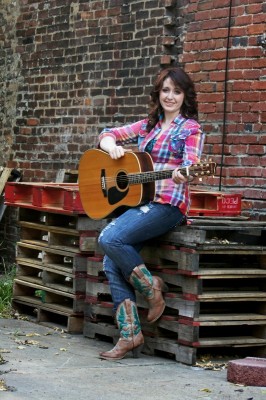 In fact, Aiken’s Nashville based producer, Jonell Polansky, is also a triple platinum publisher on Tim McGraw’s Dancehall Doctors CD. Polansky proudly says, “Alexes could rival any Nashville newcomer especially since she is born and raised in New Orleans but sings like she was born on The Opry stage.” She has also sung at the Country Music Hall of Fame in Nashville at the TCGMA and GCGMA Awards Show, and on the main stage at the Nashville Palace.

“Aiken’s new self-titled EP and her commanding voice are prominent in the club-electronica dance tracks influenced by the country remakes of these two iconic songs– Queen’s “I Want It All” and the timeless Nancy Sinatra classic “These Boots Are Made For Walkin’,” explains Polansky.

It is Aiken’s hope that her re-mixed version of “I Want It All” will become a new youth anthem.  Her re-mix of “Boots” celebrates the original song’s 45th anniversary as a soundtrack during television news coverage in 1967 as the cameras focused on US Infantry on patrol during the Vietnam War.

“Miss Sinatra originally recorded her version of the “Boots” song to welcome the troops from the Vietnam War. I’m dedicating my version to our troops around the world today and, in particular, to my paternal grandfather who is a WWII Army survivor and still a large part of my life,” smiles Aiken.
“My maternal grandfather was one of the most amazing men I have ever known. As I have said, the men in my life are the greatest men in the world, but my grandpa was really special. My grandpa was also a singer. After he was treated for thyroid cancer, his singing voice was completely destroyed from radiation. When I had sleepovers at his house, he would sing me to sleep. At the time I never realized how much of an impact he would make on my life,” recalls Aiken, of her dearly departed grandpa.
The green eyed, auburn haired entertainer was born and raised in New Orleans with deep family roots in NOLA heritage. Aiken is an accomplished teenager who has a fierce commitment to giving back to the New Orleans community. “I love participating in service events like Boo at the Zoo (a charity event at the Audubon Zoo), Red Dress Run for heart disease, Breast Cancer and Autism walks.” She continues, “My school Key Club adopts a family every year for Christmas and Easter and the school runs community-wide drives and “garage sales” to raise money and supplies for these needy families.”

Aiken’s personality is as flamboyant as her red hair. She is also a strong mirror image of her mother, Tonia, who is a nurse attorney and as pragmatic and dedicated as her father, Dr. James Aiken, Associate Director of Emergency Services at Charity Hospital who treated hundreds of Hurricane Katrina patients.

Family is important to Aiken. “My mom is one of the most hardworking people I know. I hope one day that I can be at least half the woman that she is. My dad (who also plays guitar) is my rock for advice and we have a really rare relationship that few families ever get to experience,” Aiken explains.

Aiken comes from a very musical family on her mother’s side as well. “My mom, Aunt Tina, cousin, Kyle who also plays guitar, and I all sing in the church band, “Soul Spirit”. We perform at festivals, church fairs, and Sunday night Mass.” Aiken continues, “Two of my grandfather’s brothers also played musical instruments including the accordion, flute, saxophone, and clarinet.”