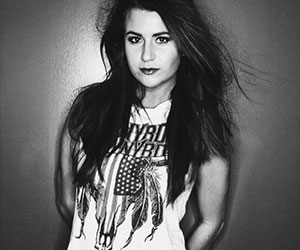 Bonner Black was a guest on The Nashville Rocks Podcast. Check out Bonner Black on the podcast now!

Bonner Black is a home grown southern girl from…Hot Rock, TN in Lincoln County. She got her start in entertainment in ballet. She danced with the Eglevsky Ballet, Ballet Magnificat, the Alabama Ballet, Huntsville Ballet Company and the Academy of Classic Arts.

Still she had songs in her heart and was secretly writing songs in her notebooks. Her father encouraged her to pick up the guitar and that songwriting drive went into over drive. She started taking vocal lessons and working with the NSAI. She then got connected with songwriters like Danny Wells, Byron Hill and Will Rambeaux who produced her first solo EP, Struck by Lightning.

She’s played in Congressmen and Senate offices while working with the NSAI to help reduce music piracy. Then upon moving to Nashville, she played a packed house at 12th and Porter and has been on a tour through Texas and has been on the Good Day Dallas tv show.

She is a member of the NSAI’s Gap Group AND ASCAPS GPS Program. She is now writing all the time.

My name is Bonner Black 🙂

I was born on August 15th eighteen years ago and I grew up on a farm in a small town of 150 people called Hot Rock Tennessee! Hot Rock is in Lincon County and it’s one of those places that Google doesn’t even know it exists (literally. I’ve tried to find it). My Mom, Jenny, was a math teacher, My Dad, Rick, owns a swimming pool manufacturing company, and my little sister, Battle, was a competetive gymnast and she’s now Captain of her cheer squad. I love my family and I love my roots, but everyone knew I would never stay in Lincon County, Tenessee.

When I was 4 years old my mom took me to my first ballet class and for 15 years, ballet was my entire world. When I was 10 years old I went to New York city for a summer on scholar ship to dance with the Eglevsky Ballet, then at 11 was accepted to study for a summer with Ballet Magnificat (a professional christian ballet company), at 12 I studied in Birmingham Alabama for a summer on scholarship with the Alabama Ballet. At 13 I became an apprentice at the Huntsville Ballet Company, and then at 14 I danced as a Senior Company Member at the Academy of Classic Arts. So basically ballet was my “thang”. But behind the leotards, I had notebooks all over the house with little songs that I would write just for fun, and I had picked up guitar for my dad.

I honestly don’t really remember why the switch flipped, but when I turned 14 something just happened in me. I was writing more, singing more, and it started to be all I wanted to do. I started begging my Mom to let me take a vocal lesson and I started taking with a man named Kevin that went to my church. After a while he sent me to vocal coach Jamie Wigginton in Nashville. I still remember that first trip with my mom and we had no clue that it would be the first trip to the city that I would end up living in just 3 years later. After a couple lessons Jamie sent me over to NSAI (Nashville Songwriter’s Associate) because he thought I should nurture my songwriting more. I became a member and soon after I met Bart Herbison (the director) in the lobby. He had me play him a couple songs and then he took me under his wing. At 15 I resigned from my position from my ballet company. I began writing like crazy and wrote with Danny Wells (Rascal Flatts “These Days”, George Strait “Check Yes Or No”), Byron Hill (Alabama “Born Country”, Gary Allan “Nothing On By The Radio”, Neal McCoy “If I was a Drinkin Man), and a lot of other amazing writers. Bart also introduced me to Will Rambeaux who wrote Faith Hill’s #1 Wild One, John Michael Montgomery’s #1 “How Was I To Know” and a lot of other great songs. Will and I started writing together heavily and at 16 he produced my first solo record “Struck By Lightning”. In the spring of my 16th year I started accompanying Bart Herbison to Washington DC to represent songwriters in the fight against online music piracy. I made several trips with him and sang in numerous Congress and Senate offices and I also sat on a panel speaking to house members on the issue. When I turned 17, the best thing in the entire world happened to me. I MOVED TO NASHVILLE ALL BY MYSELF! The driving had taken a huge toll on my family so we all decided it would be best if I just moved to Nashville my senior year (i’ve been home schooled my whole life so I finished online). We found a one bedroom in downtown Nashville and I moved 3 weeks after I turned 17 and began working on music full time. In January I held an industry showcase at a venue called 12th and Porter and packed about 300 people into the small venue. Then last spring I went on a small tour through Texas playing in some great venues and singing on several TV stations including “Good Day Dallas” in the top 5.

I am now 18 years old, still living in Nashville and still doing what I love. Writing ALLLLLLL THEEEE TIMEEEEEE. Playing out in Nashville and all over the Tennesse Valley. I am a member of NSAI’s Gap Group (NSAI’s pick top 100 writers) and ASCAP’s GPS Program which is a picked 12 writers that ASCAP works to get publishing deals. My dreams are big, but I know that if i work hard and I never give up I can achieve them. I just want to be on stages for the rest of my life 🙂 Thank you so much for supporting me and believing in me!  “She is clothed with strength and dignity and she laughs at the days to come” Proverbs 31:10-31. I know God has plans for my future and I cannot wait to see what he has in store for me 🙂