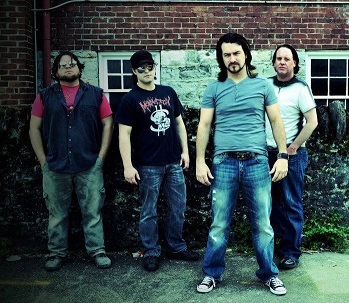 Moving to Nashville from Alabama in the pursuit a solo Album, Rodney Noffsinger (lead vocals) attended a heavy metal show and met Lee Darby (drummer) and Jeffery Wall (bass). They became instant friends and over the next couple of months Rodney and Lee shared ideas. During this time Rodney decided to put a band together. He asked Lee if he knew of any musicians available that would give the band idea a shot. Lee said he would fill in as the drummer until Rodney found one. Jeff and Lee had known each other for many years so the bassist was a no brainer. After several guitarists trying out, Lee stopped at a small bar to have a drink. Listening to a band playing, he noticed a different sound coming from the guitarist. Vincent Peer (lead guitar) was invited to a practice to try the band on for size. The band was ignited. They learned 9 covers to test their sound as a group on the public. This was well received. They wrote 6 original songs and learned 50+ cover songs to start playing to the masses. At first the decision was made to just have Rodney as the focused name on the project and Lee, Jeff and Vince would be the band. After they realized their unique sound was turning heads, that direction changed and Regulation Nine was born.

Regulation Nine consists of an energetic front man who commands your attention with his soulful, yet powerful rock voice, a drummer whose influences range from Hank Williams, Jr to The Cure, a solid bassist with an artistic flare & a classical and jazz turned rocker lead guitarist.

The band continues to write and record original music as well as continue to get airplay on Nashville’s Rock Station 102.9 The Buzz. Their first self-titled, self-released EP has just been released and available at  http://www.cdbaby.com/cd/regulationnine as well as other major online retail outlets.

This band has hit the ground running on the Nashville Music Scene and don’t plan to slow down any time soon.

“A long time veteran of the bar/small venue scene, they are currently in label discussions. Make no mistake, this Nashville based band can put the hurt on a set of speakers and likely will do the same to the music charts when its

“Rodney Noffsinger and his amazing band have a great shot of being something big.”-Wes LuAllen Pop Rinse, Repeat.

LIKE them on Facebook https://www.facebook.com/RegulationNine for daily updates, including live concert schedule. Find their music on Amazon.