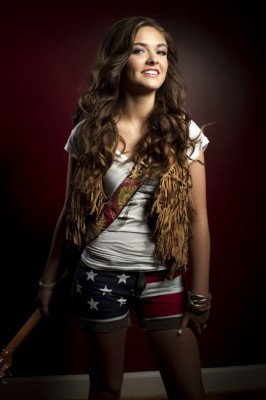 Tay Barton was born Taylor-Ann Grace Barton in Salt Lake City, Utah. She has studied music and drama in New York and California. While in Laguna Beach, California, Tay was honored to be selected as part of Disneyʼs NEXT BIG THING TV competition as the only country/pop artist to be among the ﬁve vocal groups. As a ﬁnalist she toured with Disney across the country with her music airing on Disney TV and Radio.

Find out more about Tay Barton Music and More

She tributes her experience with Disney to conﬁrming that she wanted to pursue a career in country music. In 2011, Tay and her family moved to Nashville and she is now working on some great music that she has co-written with some of Nashvilleʼs premier songwriters. Tay is currently signed with Skyville Nashville. She loves to sing the songs that she writes because they come from her life, her soul, and heart. “I have been singing for as long as I can remember”, says Tay. “I sang over breakfast, lunch, and dinner. Singing makes up the biggest part of me.”