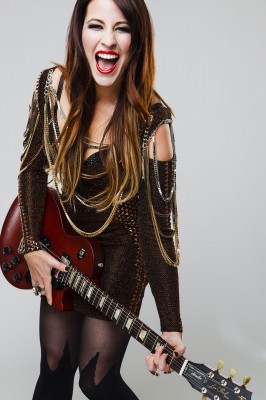 NASCAR fans like their Country Music tough, sleek and hot, just like their cars. That explains why Chelsea Bain has been rocking racetracks around the country. In May and June alone, her concert schedule included the Charlotte Motor Speedway and the Michigan International Speedway, not to mention an interview segment with Kyle Petty on the FOX Sports “Trackside” program.

Raised on an Arizona ranch, Bain personally prefers getting around on horses — she has won more than 10 national and world titles from the American Paint Horse Association. But there’s danger in her blend of Shania Twain’s and Johnny Cash’s spirits with elements of Joan Jett, Tom Petty and P!nk. Her music doesn’t crash and burn — it just burns.

Check out her debut single, “James Dean” (written by Luke Sheets and Kata Rhe Gillispie). Set at a slow, slithering tempo, it opens with Bain playing a 17-year-old running away from her family in the dead of night and into the tattooed arms of her lover. Yeah, he’s a bad guy, but the singer still hopes “maybe I’m looking for the right kind of wrong.” With her sassy drawl radiating attitude, it seems likely that she’ll cause more trouble than her partner in the long run.

Produced by Stan Lynch and Billy Chapin, her first album, All American Country Girl, on Jobe Entertainment, simmers with this sort of intensity. Even when she offers glimpses of a more sensitive side, you know she’ll end up taking the reins in the end. 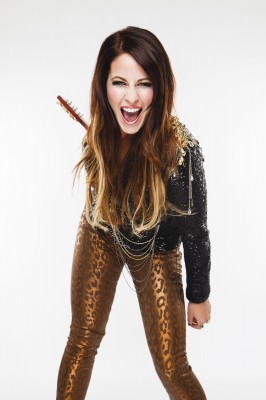 CD IN YOUR STEREO

“The Traveling Willburys is on my record player.”

“The Alchemist, by Paulo Coelho.”

“Peanut butter and jelly sandwiches must be on the bus. And bananas – I eat one every day.”

“None of them. I cherish moments, but I’m all about living new more exciting ones!”