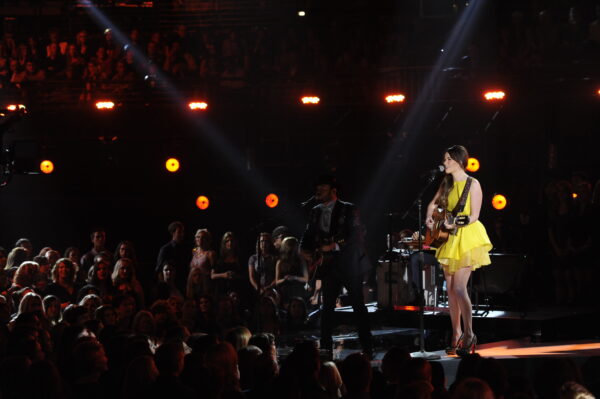 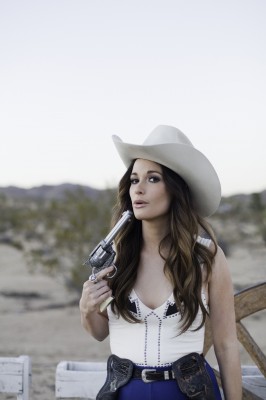 The Well is a semi-bohemian hangout in Nashville’s Green Hills neighborhood. The parking lot is a grid of potholes and chipped concrete. There’s rust on the metal panels on the ceiling. The wooden tables are notable for their fading varnish and the gaps between their slats that allow all kinds of stuff — crumbs, coffee, jewelry — to fall through to the floor.

It’s comfortably unkempt but friendly. And it’s just a couple of blocks down the road from the Bluebird Cafe, the renowned symbol of Nashville’s preeminence as a songwriting capital.

Which makes it a perfect place for a sit-down with Kacey Musgraves, whose debut album, Same Trailer Different Park

, mines the contradictions of modern America and the ever-more-confusing jumble of emotions in her evolving, introspective heart.

It’s a very different album by contemporary Country standards — no dramatic vocal peaks, no rapping, no truck and/or beer anthems — and those differences work in her favor. Her first single, “Merry Go ’Round” (written by Musgraves, Josh Osborne and Shane McAnally), became a Top 10 single at radio — an improbable development given its dreary portrait of suburban life as a likely dead end.

That was just the beginning. In 2013, Musgraves opened for Little Big Town, toured with Kenny Chesney and appeared at Bonnaroo, in addition to headlining her own shows — the last one of which featured some unexpected drama when she began crying in the middle of “Merry Go ’Round.” Her grandmother had died of smoke inhalation the night before, and with the fatalistic opening line — “If you ain’t got two kids by 21, you’re probably gonna die alone” — all the improbabilities of 2013 opened a wellspring of feeling.

“It’s been a crazy, improbable year, packed with so many things,” she reflected. “That song is kind of what started it. It’s also about my hometown and is inspired by where I grew up, so it was just screaming words to me. They were partly good tears, though, just a release of emotion.”

On a far more positive note, Musgraves walked off with CMA’s New Artist of the Year trophy in November. Weeks later, Musgraves was still trying to wrap her mind around that victory.

“I’m a huge fan of Country Music, so it means a lot that I would be thought of as representing it,” she said. “I really didn’t expect to win. I thought Florida Georgia Line really had it in the bag. But overall saying, ‘Hey, you’re somebody that deserves to be in this world,’ that means a lot.’”

Though a fan of multiple genres — she’s written and will shortly tour with Katy Perry — Musgraves grounds her sound in classic Country. “Follow Your Arrow” (Musgraves, Brandy Clark and Shane McAnally) exemplifies her contradictory approach. Its acceptance of weed and same-sex relationships is decidedly 2014, while the folk guitar riffs and lighthearted whistling evoke the sound of Marty Robbins’s 1965 hit “Ribbon of Darkness.”

You’ve gotta have that push and pull,” she said. “That’s my favorite thing, when there’s juxtaposition between something that sounds really sad but has uplifting lyrics, or vice versa. Or something that has a really modern lyric but sounds really traditional. I feel like if anything is too one-sided, then it’s either predictable or boring.”

Neither of which remotely describes her artistry or, for that matter, her career trajectory. “If you have one chance to say something to the music world, then it better be what you are ready to say,” Musgraves said. “A lot of people probably would have jumped at getting signed or whatever, but I guess that’s because they’re more driven by wanting to be famous or something. I just wanted to make great music that really mattered to me. I knew that whenever it was right, it was gonna feel right, and the right people would hopefully be onboard.”

She had that opportunity when UMG Nashville Chairman and CEO Mike Dungan welcomed her to the Mercury roster. She enlisted Luke Laird and Shane McAnally, neither of whom had produced a previous hit single, as her co-producers. They had essentially finished Same Trailer for months when she wrote “Arrow” and “Silver Lining” (with Osborne and McAnally). Instead of holding them for the next album, she insisted on a last-minute session. Both songs helped shape the end product, with “Arrow” attracting attention for its controversial subject matter and “Lining” kicking off the album with a sense of hopeful melancholy.

“She knows what she wants, but she acts like she doesn’t know at all,” Laird said. “There’s no sign of ego, but you can tell she has that instinct. It’s something you can’t just teach artists.”

Her performances are built similarly from contrasting elements. Where many of her contemporaries fold arena-rock guitars and pop phrasing into the genre, Musgraves incorporates heavy doses of steel guitar. And her visual imagery cheekily features Western cacti and cowboy hats.

“I grew up singing Western swing and really traditional Country Music — Ernest Tubb songs, Jimmie Rodgers songs, Patsy Montana, Patsy Cline,” she noted. “At the time, I liked the performance aspect. But I was like, ‘Mom! Nobody my age likes these songs!’ I was feeling kind of nerdy. Now, looking back, that gave me a huge, huge schooling in eras that came way before me, so now I can take bits of pieces that stand out to me and make them fresh.”

Musgraves hasn’t yet mapped out her plans for 2014. Sessions are yet to begin on her sophomore album, and she doesn’t seem in much of a hurry to get to it. “There’s something just really special about a first record,” she explained. “I just want to hold onto that as long as I can.”