Rich Lehmann: When I graduated from Wabash college, I knew I wanted to do something in music

NR: What was the specific portion of your music major?

RL- I’ve always taken music. My mom made me play piano since I was a little kid and had me in choirs ever since I can remember and I was always kind-of like the athlete that played three sports and you know quarterback of the football team and all that stuff. So Sophomore year in high school I got asked to be in this rickety band for our talent show. We did like 3 Doors Down and Edwin McCain. It was the most fun I’d had in my life up to that point. When I went to college and was playing football there too, but I was going to be a business major and all this, and I decided I couldn’t do it and switched that year to music and made business my minor for backup ya know. I really got into music theory in college and I liked that because I had all this piano training, but I never got to play the stuff I liked. I put it to the side a little bit and uh with music theory it’s all patterns and chords and you start recognizing patterns in all music. Then all of the sudden I could play most anything and I had this skill…

I started playing piano bars and doing covers and stuff like that. I started taking voice lessons and taking it seriously and I didn’t like once again not being able to study what I wanted, but it taught me to control my voice however I want. It was awesome.

I had an opportunity going into my last year to intern in Nashville. I interned for Wrensong Publishing and I got to work with John Randall, Ashley Monroe…

NR: I know her keyboard guy and drummer on the road…

RL- I was an intern man. I don’t know if she remembers me but it’s been a long time. It helped me learn what it takes to do something in this business. 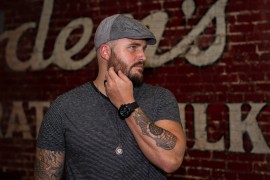 SO family stuff happened so I had to go back home to Northwest Indiana. That’s where I’m from, just outside of Chicago in Gary you know where Michael Jackson is from.

You know out there, everyones in the steel mills and whatever. I was substitute teaching and playing at steakhouses in a stupid little tuxedo. So I reached out to anyone. Folks in New York, Nashville LA…anyone I knew at the time…So I ended up dating this girl from here who’s mother was dating this guy that owned a large pharmaceutical sales company. She was like hey, I can’t promise you a job, but I can get you an interview. So I ended up getting it and now I have a decent source of income and can be in music city at the same time. Now I’ve been here 5 years. That’s what Brought me to Nashville.

NR- So you are in sales?

RL-Yes and now the company is owned by a major health company Cardinal Health. It’s my regular 8 to 5 thing.

NR- so many independents have to have the day job so they can keep doing what they love.

NR- your schedule is more stable and you have one of the better day jobs of most the independents I talk to. It’s probably not a slouchy income either…

RL – We’re comfortable…I just got married too a couple months back. I mean we are debt free. I just keep telling myself….I mean realistically we all want to be rock stars I know that don’t get me wrong. It would be great.

NR- Even I want to be a rock star…I’m not doing anything to get there, but you know…

RL- At the same time how awesome would it be to make what I make there and keep doing music. I’ll take that for the rest of my life ya know. And I can do whatever it takes to get the music thing rolling.

NR – Thats why you’re into companies like Codamark, coming in to help out and make that more of a reality

RL- exactly exactly. And I need help with Social media. Don’t get me wrong I know I need it, but it’s tough to keep up. So I’m just going to be me.

NR- In Nashville, got day job, stable…whats the next move?

RL- Number one is to build a bigger fan base. It’s tough in Nashville and it’s so over-saturated. I did an EP all by myself first of this year, got it licensed promoted it and sold it all by myself and the biggest response I’ve gotten wasn’t from Nashville, but folks back home ya know.

NR- That’s the way it is here.

RL- I would like to build it up here too. Cause as we all know you have to play country’s game…

NR- I don’t know that I would necessarily say that. There is a game being played here, but I think you can win without playing it. It’s really about consistency and follow through. That’s what its all about. If you become flaky and start dropping appointments, backing out of opportunities and stuff, then it won’t go well. You don’t necessarily have to play the country game, but you’ve got to be a self promoter, motivated, make your appointments, play on time, quit on time. One makes the venue happy, one makes the fan happy. Music is a business…if you treat it like a business, then you’ll follow through and be successful.

RL- We have potential to raise some money with Codamark and create a really great recording project.

NR- tell me about your EP and the Rich Lehman sound.

RL- The Fray type dissonance melodies with Rob Thomas lyrics from the 90s with a little cheesiness to it although upgraded with electronic tones and some pop stuff mixed in. So I’m going to play piano and sing, then fill it with cool shit we can come up with. We kind of do that because I was doing a lot of Lady Antebellum type duet group for a little bit, just writing songs and going by Nashville rules and I’m just gonna write when I feel good, when I feel bad, my life sucks, my life’s awesome, got the girl…

RL- When I was in middle school in the late nineties, I went to a christian school so my mom drove me several miles away to this christian school and she always had the radio going to Elton John and Billy Joel kinda stuff, 80s stuff, so when I got to High school I went back to listen to all the 90s stuff that I didn’t get to listen to. So I rediscovered Alice In Chains and Rob Thomas. Lyrically speaking I think he’s amazing so really heavily influenced by Rob Thomas lyrically. Then doing all the piano bar type stuff a little foofier like The Fray. I love the dissonance they use on the iano. They use a lot of 7ths and clashing chords, but they always resolve to this big booming major chorus. Emotionally your hearing all this then they hit you.

NR- There was a time in the 90s when everyone wanted to end on a 5. It was like uh……is the song over? You’ve identified your influences, what places have you played in Nashville? 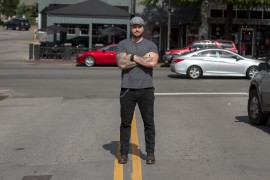 NR- You have people to pull in for full band stuff? Are they Music City Mercenaries or what?

RL- They’re friends. My drummer is a friend and has the same dream as me with a day job. I have a pretty steady base player, then I throw in guitar players that can riff a little bit because most of the rhythm is in the piano and the melodies I play. I’d like to get a legit full band all the time.

NR- Do you have a place you’d really love to play?

RL- The old 12th and Porter

NR- Do you travel to play?

NR- Tell me about the EP you currently have

RL- The one that’s a fan favorite is Back to Good. It’s a title I kindof stole from Matchbox 20 but I spell it differently. It’s about me coming back from LA after trying to do my own thing in music. It’s about yeah I’m down and out right now, but just gimee a second I’ll work it out and get back to good.

NR- Are all the EP songs full band?

RL- Yes, we had a full band and a bunch of computer patches that we like to use. Angel is just about when I was here in Nashville and had a one night stand that I wanted more from and she disappeared forever. The third track is one of my newer ones and its being married and being happy with all that stuff. It’s kindof a throwback to a John Hughes movie, you know just cheesy…

RL- Oh absolutely, you gotta keep at it and when your feeling cheesy, you gotta write some cheesy stuff. The last song is kindof our version of Need You Now and I wrote it with my last band called Breaking Ivory. It’s called Lie With Me. Meet this girl in a bar and conversation brings up old feelings and lets take tonight to say goodbye. Lie With Me …. Lie with me in the bed, but lets also lie to each other and get this over with.

RL- Yeah, did you mean that or did you mean that? Oh yeah it’s cleaver [laughs]. I also did some hard copy CDs and a piano cover of Hemorrhage by Fuel. It’s out there somewhere. I’m going to work With Nolan Neal, because he knows the guys in Fuel and hopefully get some licensing to get that track around. I just hand those out in hard copies. It’s not on iTunes or anything.

NR- Where do we find more about Rich Lehmann?

Are you an artist or do you know one who’d like to share their story with Nashville Rocks? Hit us up at info @ nashvillerocks.com.