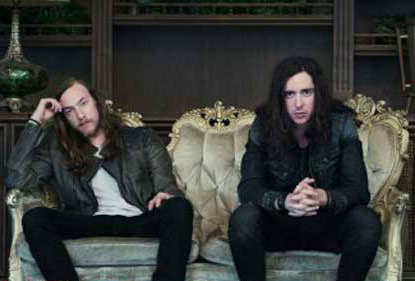 Much of Broken Compass is a Direct Adrenaline Rush

Last year, Spencer Chamberlain promised that Sleepwave, his new musical vehicle with multi-instrumentalist/programmer Stephen Bowman, was going to snatch rock music away from the codified auspices of businessmen and bring back the unvarnished honesty he felt the first time he heard bands like Nirvana and Alice In Chains. To that end, the duo (along with producer David Bendeth) have made an album that transcends the radio-rock wasteland, as well as the furious menace Chamberlain was a part of during his stint in Underoath. There’s a certain kind of chrome-plated nostalgia at play on Broken Compass, one that hearkens back to the glory days of Alternative Nation, where bands like Smashing Pumpkins, Foo Fighters, Nine Inch Nails and Filter held court and garnered mass acclaim, but not at the expense of extracting their personalities from their art.

Much of Broken Compass is a direct adrenaline rush that offers energy and melody. Songs like “Rock And Roll Is Dead And So Am I” and “The Wolf” find Chamberlain making good on his promise to bring back the rock. There are also moments where Chamberlain and Bowman create electronic atmospheres to couch their bigger arena-rock riffage, and the result (“Whole Again,” “Disgusted : Disguised”) intersects through Nine Inch Nails’ The Fragile and Foo Fighters’ The Colour And The Shape. Lyrically, Chamberlain doesn’t come off too optimistic with sentiments like, “Now I’m the empty one with no one here left to hold up my head” (“Hold Up My Head”) and “There’s nothing left to say/You were never listening” (“Replace Me”). But in the context of the whole album, it feels like he’s dictating his intentions to the world like a prizefighter—and the world had better believe him.

Given Chamberlain’s storied history, there’s a certain subtext to the title Broken Compass that implies negative commentary. (Is he going in the wrong direction? Is he standing still?) With Sleepwave, it’s quite clear he’s not interested in being the poster child for the next generation of metalcore. Yet given the character and attitude exhibited on these 11 tracks, it’s apparent he’s not about to be swallowed up in the hellish lowest common denominator promulgated by the end of the music industry he despises. Chamberlain and Bowman know where they are going, and it’s a trip music fans should climb aboard to take.