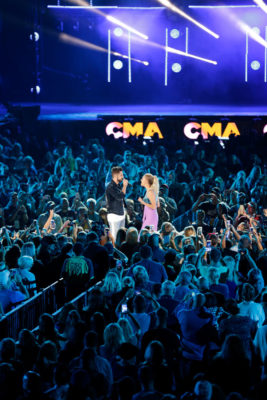 NASHVILLE – The 46th year of CMA Music Festival, the Music Event of Summer, drew sold-out crowds to the Nightly Concerts at Nissan Stadium, capacity crowds at Chevrolet Riverfront Stage and the Cracker Barrel Country Roads Stage at Ascend Amphitheater, and largest fan engagement by Country Music fans in the event’s history from visitors from all 50 states and at least 18 international countries.

The excitement in downtown Nashville includes 11 stages, seven of which are free of charge to the public, and offers 167 hours of music from 350 plus artists and over 1,100 musicians.

The Cracker Barrel Country Roads stage at Ascend Amphitheater, headlined by Big & Rich, Sara Evans, Hunter Hayes, and Dan + Shay, as well as the daytime Chevrolet Riverfront Stage, hit capacity numbers repeatedly over the course of the four-day event. Halfway through Old Dominion’s CMA Fest kick-off set Thursday morning in Riverfront Park, entry was briefly halted due to the volume of excited fans pouring in. Gates re-opened after each postponement.

On Wednesday night prior to CMA Music Festival’s official kick-off, CMA partnered with the Country Music Hall of Fame and Museum to host a surprise Jason Aldeanconcert replete with fireworks at the Chevrolet Park Stage in honor of his Asphalt Cowboy featured exhibit.

In a thrilling and emotional surprise appearance, 2016 Country Music Hall of Fame inductee Randy Travis joinedMichael Ray Thursday on the Chevrolet Riverfront Stage for a moving performance of his CMA Award-winning No. 1 smash “Forever & Ever, Amen.”

In another stunning surprise, reigning CMA Entertainer of the Year Garth Brooks brought the packed house at Nissan Stadium to a roar with a medley of his classics, including “Friends in Low Places” and “The Thunder Rolls,” as well as his newest single “Ask Me How I Know.” This marks Brooks’ first CMA Fest appearance in nearly 20 years. 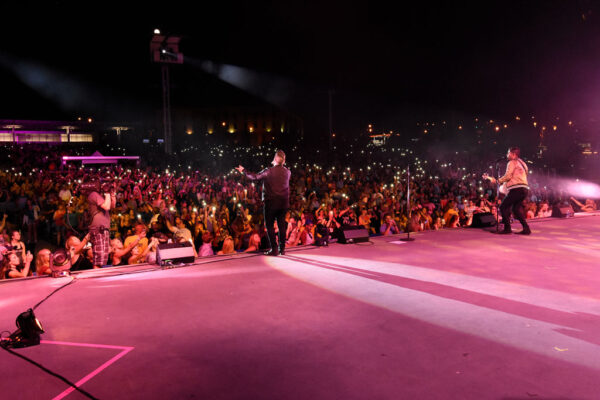 XFINITY Fan Fair X at the expansive 350,000 square foot Music City Center launched each day with Artists of the Day that included Hunter Hayes, Martina McBride, and Jake Owen. Saturday’s Artists of the Day Brad Paisley and Carrie Underwood drew an unprecedented crowd to the CMA Close Up Stage with CMA Awards Executive Producer Robert Deaton to share the behind-the-scenes process of prepping for Country Music’s Biggest Night™. The superstars then revealed they’ll be returning to host for the 10th consecutive year at this year’s “The 51st CMA Awards” live from Nashville’s Bridgestone Arena Wednesday, Nov. 8. The three-hour telecast begins at 8:00 PM/ET on the ABC Television Network.

The panel was livestreamed and can be viewed on Billboard.com. Fans have flocked online to view the livestream as well as a highlights video of Brad and Carrie’s most memorable hosting moments that debuted during the discussion panel. The pair of videos has already been viewed nearly one million times across the internet and social platforms after just two days.

The Budweiser “Forever Country” Park Stage was a hit with fans of all ages as timeless Country stars such as Tracy Lawrence, Little Texas, Restless Heart, Daryl Worley, and others carried the crowd with countless hits as they enjoyed games and activities like cornhole presented by Budweiser, and rocking chairs provided by Cracker Barrel.

“This is definitely one for the record books,” said Sarah Trahern, CMA Chief Executive Officer. “This year’s Festival was marked with memorable moments and one-of-a-kind experiences. We’re happy how fans embraced not only our new stages, but also the city during an exciting historic Stanley Cup run for the Nashville Predators.”

CMA Music Fest fan engagement across the board was at an all-time high. The official free CMA Music Festival app was accessed throughout the four-day event by over 48,000 users besting the previous year by 25 percent. The average time spent per visit on the app was up over 41 percent. CMA Fan Access users were up 62 percent and CMA Fan Access engagements were up over 183 percent. The volume of social posts from Twitter and Instagram, powered by Sprinklr, were featured on the screens at six different stages, including Nissan Stadium, which saw an increase of 116 percent in social interactions.

This year, CMA implemented Budweiser FastBar at the Festival. Attendees clamored for the RFID wristband which offers easy access to purchase beverages across the downtown footprint by registering a method of payment and Driver’s License, and scanning in at various purchase points, eliminating having to present cash or a credit card every time. As a result, total beer sales increased by 126 percent.

The newly created VIP Nash Pass was also in high demand. All 1,500 $50 passes, which offered early access to the Ascend Amphitheater performances, sold out before the start of the Festival. Nash Pass also included admission to XFINITY Fan Fair X, as well as tours of the Country Music Hall of Fame and Museum and Ryman Auditorium during the Festival.

“The quality of digital and marketing partnerships this year, combined with the heightened fan engagement, speaks to the relevance and reach of Country Music,” said Damon Whiteside, CMA Chief Marketing Officer.

Preliminary attendee stats for this year’s Festival are based on attendee registration data via CMA Fest Fan Access. 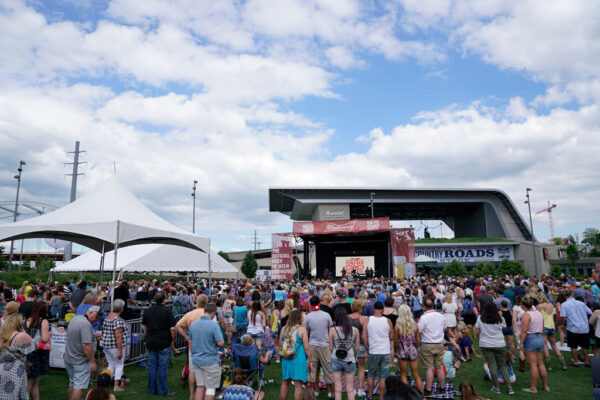 “CMA Music Festival continues to attract a loyal and engaged audience that is evolving both demographically and in breadth of interest across all types of Country Music,” said Karen Stump, CMA Senior Director of Market Research. “It’s our fan base that is key to supporting the success stories from this year’s event.”

2017 CMA Music Festival merchandise sales of items such as tees, tanks, hats, accessories, and youth items are up over 2016, and e-commerce pre-orders are up over 400 percent. Official CMA Music Festival merchandise is still available here while quantities last. Fans can also purchase the special edition event tee that was previously only available onsite at the Festival.

CMA Music Festival directly benefits music education programs across the country, as every artist at the Festival donates their time, performing for free. The result of that generosity is that Festival proceeds support in- and after-school programs touching the lives of 1 million students nationwide through the work of the CMA Foundation.

Brooks popped up at the HGTV Lodge with Trisha Yearwood to announce the cable network’s donation to the CMA Foundation and meet local CMA Music Teachers of Excellence Thursday afternoon prior to his surprise Nissan Stadium performance.

Evans and ONEHOPE Wine, which creates award-winning wine that empowers people to do more good in the world with everyday actions, joined forces to develop the ONEHOPE Sara Evans Signature Series 2014 Napa Valley Cabernet Sauvignon, which was available at the ONEHOPE booth inside XFINITY Fan Fair X. Evans debuted the wine during a pre-Fest event Wednesday. Every purchase of the limited-edition bottle will benefit the CMA Foundation.

BBC Radio 2, with over 15 million listeners, will broadcast four one-hour specials in October as a lead into the 2017 CMA Awards.

The previously-announced three-hour ABC Television Network special, “CMA Fest,” co-hosted by Thomas Rhett and Ballerini, airs Wednesday, Aug. 16 at 8:00 PM/ET. The special debuted in 2004 and is helmed by Deaton.

CMA Music Festival is organized and produced by the Country Music Association. Fan Fair® is a registered trademark of WSM, Incorporated and is used by permission.

2017 CMA Music Festival merchandise sales of items such as tees, tanks, hats, accessories, and youth items are up over 2016, and e-commerce pre-orders are up over 400 percent. Official CMA Music Festival merchandise is still available here while quantities last. Fans can now also purchase the special edition event tee that was previously only available onsite at the Festival. 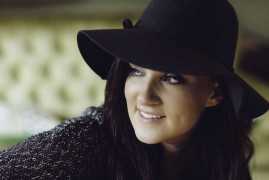 NASHVILLE – As part of the events and activities leading up to “The 48th Annual CMA Awards” on Wednesday, Nov. 5, the CMA Songwriters Series will return to Nashville on Tuesday, Nov. 4 (9:00 PM/CT) at the CMA Theater at the Country Music Hall of Fame and Museum (222 Fifth Ave. South). The CMA Songwriters Series will feature 2014 CMA Awards nominees Brandy Clark and Jaren Johnston (other songwriters to be announced soon).

Clark received two CMA nominations this year: New Artist of the Year and Song of the Year (for the Kacey Musgraves’ hit “Follow Your Arrow,” which she co-wrote with Musgraves and Shane McAnally). Her debut album 12 Stories was named the best album of 2013 in any genre by New York Magazine, New York Post, Boston Globe, and NPR’s Ann Powers, among others. Clark also wrote Miranda Lambert’s No. 1 hit “Mama’s Broken Heart” (with McAnally and Musgraves), The Band Perry’s No.1 hit “Better Dig Two” (with McAnally and Trevor Rosen) as well as songs recorded by Sheryl Crow, Craig Morgan, Reba, LeAnn Rimes, Darius Rucker, Keith Urban, Gretchen Wilson, and more.  She will embark on Eric Church’s “The Outsiders World Tour” beginning Oct. 16.

Johnston also boasts two CMA Awards nominations. He is nominated in the Single of the Year category for co-producing Dierks Bentley’s “Drunk On A Plane” as well as for Album of the Year for co-producing Bentley’s Riser. He also wrote 2014 CMA Single and Musical Event of the Year nominated song “Meanwhile Back at Mama’s,” recorded by Tim McGraw and Faith Hill. Johnston also penned No. 1 songs for Urban (“You Gonna Fly”) and Jake Owen (“Beachin’”). He is a member of Big Machine Records recording group The Cadillac Three, who are currently on Owen’s “Days Of Gold Tour.”

Tickets for the Nov. 4 CMA Songwriters Series at the CMA Theater located in the Country Music Hall of Fame are on sale today and are $30 for floor and mezzanine seating and $20 for first and second tier seating. To order tickets, visit CMASongwritersSeries.com.

The CMA Songwriters Series kicked off its 10th Anniversary season with standing-room-only shows at the Sundance Film Festival in January, and has performed shows in Paradise Island, Bahamas as part of the Atlantis Live Paradise Music Festival Presented by HGTV, Chicago, New York, and London in 2014.

Also in 2014, CMA has partnered with public television’s critically-acclaimed concert series “Front and Center” to present two separate hour-long concert specials for the 2014 fall season. The shows will feature the music of CMA Award winner and 2014 CMA Awards nominee Lady Antebellum as they are joined by special songwriter guests, and a special 10th Anniversary CMA Songwriters Series celebration with CMA Award winner and 2014 CMA Awards nominee Bentley. Bentley will be joined by top songwriters Jim Beavers, Ross Copperman, Brett James, and Jon Randall. The episodes, which taped earlier this year in Nashville, are scheduled to air this month leading up to “The 48th Annual CMA Awards.” Check local listings for dates and times.

For nearly a decade, the CMA Songwriters Series has provided a platform for the artisans who, through their craft, pen hits that touch the lives of millions of music fans. Since it began at Joes’ Pub in New York City in 2005, the CMA Songwriters Series has presented more than 75 shows in 15 cities, including Austin, Boston, Belfast, Chicago, Dublin, London, Los Angeles, New York, Paris, Phoenix, and Washington, D.C. at the renowned Library of Congress.

The series has featured 132 of music’s most gifted storytellers who collectively have 71 CMA Song of the Year nominations.

For more information on the CMA Songwriters Series visit CMAsongwritersseries.com.

ASCAP, BMI, and SESAC are the official partners of the CMA Songwriters Series.