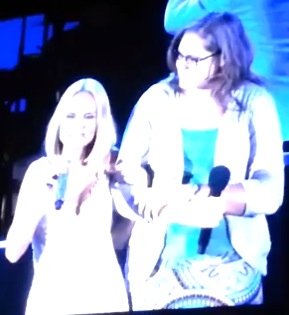 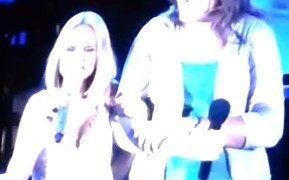 When Kristin Chenoweth invited fan Sarah Horn on stage to sing the Wicked duet “For Good” at the Hollywood Bowl last Friday, she had no idea she was about to blow some minds — including her own.

Horn, later revealed to be a Southern California voice teacher and musical theater lover, stunned so many with her tremendous chops that she was immediately branded a ringer.

But in a first hand account published by Broadway World, Horn explains exactly how this magical moment came to pass:

Toward the end of the second half of the performance, Kristin wanders on to the pasarel. She held a mic up to a lady in front of me and asked if she knew the song “For Good.” Nope. I took the chance, as I was directly behind Kristin, to stand up and wave and say, “I know the song!” This is not like me – to jump up and wave my arms like a crazy person and raise my voice at a celebrity. One of Kristin’s backup singers held a mic up to my face so I could answer some questions: “What’s you’re name?” – “Sarah.” “Who’s your favorite Broadway star?” I sarcastically hummm as if it’s a difficult question to answer. “Do you know the song ‘For Good’?” – “Yes. It’s one of my favorites.” This seemed to peak (sic) her interest. After this, she moved down the line and asked a guy if he knew the song and bantered with him for a few seconds. Afterwards, she said something about going back to pick me because I was a girl. Then, she invited me up on stage.