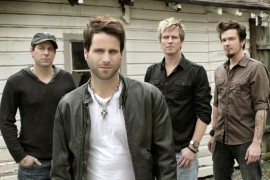 Parmalee is a Southern rock patrimony, dues paid in church gigs, a player too drunk to pick, and a late-night gunfight: Parmalee’s Country pedigree is as real as it gets.

Brothers Matt and Scott Thomas tagged along on their father’s blues/rock band gigs around Greenville, N.C. Soon they started playing on their own, joined by their cousin Barry Knox, a church choir drummer. After their dad’s inebriated guitar player failed to appear for a show, Matt took his place, with Scott assuming the drum chair and Barry switching to bass. When guitarist and keyboard player Josh McSwain came onboard, Parmalee was born.

Their road led eventually to Nashville — specifically, to a parking lot on Demonbreun Street, where they lived in their RV for a month of intensive writing and demo recording. Even the 2010 flood didn’t stop them, but a bullet almost did: After a North Carolina show in September 2010, Scott suffered a near-fatal wound during a robbery attempt. (He did, however, kill one of his assailants with his own legal weapon.) Ten days in a coma and 35 days of hospitalization were his first steps toward recovery, which culminated in his rejoining the band to audition successfully for Stoney Creek Records.

Produced by the New Voice team, released in December, Feels Like Carolina loosely tells the band’s story through rock-solid vocals, tightly crafted tunes and a few discreet synthesizer effects — just enough to add a distinctive edge while keeping it Country.

For more on Parmalee, visit www.CMACloseUp.com.

McSwain: “‘And Justice for All,’ bluegrass style.”

SONG YOU WISH YOU HAD WRITTEN

McSwain: “My wedding in Mexico.”

Matt Thomas: “Any of the shows I played with my dad.”